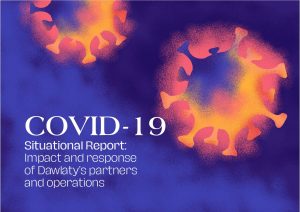 Dawlaty presents this report as a review of the impact of the COVID-19 virus impact on the activities and programming of its partners working in Syria, Lebanon, and Turkey. A convenience sample of eleven partners were selected to participate in a survey. The respondents present a diverse selection of partners in the areas of their operations and programming and who consented to take part in this quick assessment.
The COVID-19 was declared as a global pandemic at the end of January 2020. Cases of positive identification of the virus were first reported around the end of March in Syria and have risen to a conservative 42 positive cases. Yet these numbers are more likely due to a lack of proper mobilization on detection and reporting. Although the Syrian regime has received testing kits and implemented confirmation testing in areas under its control, it maintains that the numbers it reports do not include those of northeast or west of Syria. Testing and reporting in both of these areas are mainly coordinated by present local authorities and which have for a good period of time, did not have access to testing kits and equipment. At the moment, two or three cases have been confirmed in NWS and none in NES, though the latter does report more preparedness to do so. On the other hand, Syria’s health care system is highly fragile with a limited capacity of a threshold of 6,500 cases which is not uniformly distributed across the country. In certain areas, such as Deir el-Zor, the threshold is calculated at zero cases.