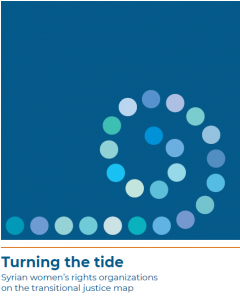 Navigating social and political repression to advocate for gender justice is a skill that women activists and groups in Syria have honed over many years. Despite decades of repressive environment for political organizing, activists and women-led groups campaigned for citizenship rights and changes to laws on honor killing and created coalitions across political and religious lines to press the government to ratify CEDAW and act on women’s rights and violence against women in Syria. When protests started in 2011, women played important leadership roles. As the uprising turned into an armed conflict, the spaces for women’s political participation were again marginalized. Yet women continue to play important roles both locally and internationally, supporting victims and advocating for the rights of women and communities. They continue to do this work despite their marginalization from political processes and civil society forums in which the issues they are directly engaged in are discussed. Their voices are often tokenized and their experience and insights pushed to the margins.

Discussions on the scope and modalities for justice, and transitional justice, in Syria have been the subject of debate and deliberation since the start of the protests. These discussions have often focused on traditional top down approaches to transitional justice and were based on gender-blind analysis of violations and the experience of harm. Women have largely been absent from these discussions and plans as subjects and authors. When included, it is either to discuss the issue of sexual violence or, often, as the ‘victim’ on stage to tell their testimonies. Yet women-led groups have valuable insights into the violations on women and communities, as well as their impact that must be built on and accounted for. In their daily interactions with victims and survivors, they have nuanced and critical insights into the scope and mechanisms that could provide justice to them. While transition and national mechanisms for transitional justice seem far away, measures to bring justice and accountability for human rights violations against Syrians continue. In order for these mechanisms to bear fruit and have a transformative impact, the phenomenal work and insights of women-led organisations must be brought to light and centered as the justice processes are being designed and implemented.

In 2019, Dawlaty and WILPF initiated a project on gender-sensitive transitional justice, in partnership with a group of women-led organizations. The project aims to provide gender-sensitive knowledge and analysis on transitional justice developed by those directly engaging on these issues with communities. It also aims to build the capacity and provide opportunities for women community leaders to advocate for gender-sensitive and victim-centered justice. This mapping is the first step in that process. The mapping analyses the context within which women-led organizations operate across Syria, and provides an overview of the way in which they advocate for gender justice in these contexts, as well as the challenges they face and their capacity needs.