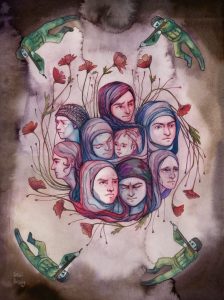 On 29 May, 2020, a video circulated on the Internet filmed in the Turkish-controlled city of Afrin, inside the headquarters of the al-Hamza faction, affiliated with the Turkish-backed Syrian National Army (SNA). The video depicted the headquarters being raided by armed men as well as civilians. Inside were eight women formerly detained by the faction, accompanied by a child. The raid followed an incident the previous day in which one of al-Hamza’s fighters threw a hand grenade into the shop of a displaced civilian from Eastern Ghouta, killing one adult civilian and a child, and injuring others. This prompted a number of residents to demonstrate in front of the faction’s headquarters, demanding the handover of those involved and protesting the repeated attacks against civilians.
Though the video appeared to show the liberation of the detained women, their whereabouts remain unknown, as do their names, identities, and the reasons for their detention. Conflicting and alarming reports suggest they may have been handed back to al-Hamza, which is notorious for countless violations including theft, kidnapping, killing, and intimidation of civilians. Another report, from the Violations Documentation Center in Syria, said they had been handed over to military police.
While the women’s whereabouts were unknown, activists managed to document the names of two who appeared in the video: Haifa al-Jasem, from Afrin, detained since 2018; and Rukan Manla, from the town of Juwayq,, detained since July 2019, according to the activists. This means at least one of the detained women spent two years in the headquarters of a military faction, without her family knowing her location, the reasons for her detention, or the circumstances she faced.
We in the Families for Freedom movement were shocked at the sight of these women detained in a military headquarters accompanied by a child, in conditions degrading to human dignity. We condemn any attempt by the faction to justify its actions on the pretext of “security reasons,” in light of the women’s Kurdish ethnicity. Failure to disclose the fate and identities of the detained women means that their families are unable to communicate with them, depriving them of the right to hire a lawyer and obtain justice. Likewise, we condemn discriminatory behavior by any party on ethnic, religious, sectarian, regional, or sexual grounds.

The movement also holds the de facto authorities in Afrin—first and foremost the Turkish forces that are its principal rulers—responsible for the release and wellbeing of the detainees. Neither the SNA factions nor the military or civilian police forces would be able to commit acts of this kind were it not for Turkey’s indulgence of them.
The detention of these eight women is neither the first nor the sole case of its kind in Afrin. For the past two years, the Turkish-backed SNA factions have continuously practiced arbitrary detention and forced disappearance against the city’s civilians, be they Arabs or Kurds, within plain sight and earshot of Turkish forces, according to reports issued by international human rights organizations including the International Independent Investigation Commission and Amnesty International. In addition, Syrian human rights organizations documented 506 cases of arbitrary detention in Afrin during the second half of 2019, finding that at least 15 women have been forcibly disappeared in the Afrin region since the beginning of 2020.
These reports also document that the factions have practiced torture against civilians in their military headquarters, in a manner similar to the security branches of the Assad regime that opposition factions claim to combat. Added to that are kidnappings, extortion, and demands for ransom from detainees and their families in exchange for their release.
We, the Families for Freedom movement and the undersigned organizations, call on the Turkish government to take immediate action and pressure its forces, the SNA factions, and the military and civilian police in the city of Afrin to:

1- Reveal the whereabouts and identities of the detained women and release them immediately;
2- Open an investigation into the reasons for their detention and their conditions during the period of detention, and hold those responsible to account;
3- Immediately release all detainees in the headquarters of the military factions, especially women and children, and hold the perpetrators of violations to account;
4- Cease making arrests without warrants from a competent judicial authority;
5- End cases of detention without trial;
6- Permit neutral organizations to enter all detention centers and learn of detainees’ humanitarian conditions, especially women;
7- Explain and clarify the legal bases for arrests and detentions, publishing them in clear language understandable to all residents of Afrin.

Families for Freedom movement also calls on all local and international human rights and humanitarian organizations and bodies, as well as international parties influential in Syria, to pressure the Turkish government to put an end to human rights violations and arbitrary arrests in areas controlled by its affiliated forces in northern Syria.