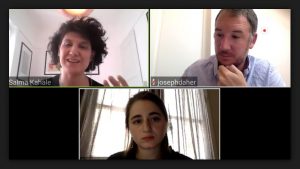 On Thursday, 25 June 2020, in light of the Brussels IV Conference, Dawlaty, IMPACT, We Exist!, and the Cairo Institute for Human Rights Studies (CIHRS) held a virtual side event on the Impact of Financial and Funding Barriers on Syrian Civic Space. The event was attended by Syrian civil society, international organisations, and representatives of United Nations and European Union institutions and member states. It was based on a study and policy brief, prepared by the organizers to highlight the impact of donor policies and financial restrictions on Syrian civil society across Syria and in neighboring countries, and ways to mitigate those through constructive steps and mechanisms.

Challenges have increased for Syrian organizations in maintaining their activities and work and strengthening their role in serving communities, especially in areas currently held by the Syrian government. These exacerbated challenges, as illustrated by speakers at the event, include increasing sanctions by the international community against the Syrian government, a global economic crisis due to the pandemic and mounting protests and instability in neighboring countries.

Two Syrian representatives of Damascus-based civil society organisations spoke about how these policies affect their activities on the ground. Leen,[1] a representative of a small Syrian organisation working in different parts of Syria on issues related to domestic violence, outlined the challenging environment they are facing, including skyrocketing living costs, the collapse of the Syrian Lira, border closures, COVID-19, sanctions, as well as increasing unemployment rates and low wages in the public sector. According to Leen, the organisation has been facing extreme difficulties with funding mechanisms. In addition, although operating since 2015, the organisation has been unable to register thus making it dependent on an external intermediary for projects and funds, which costs them resources and money. She added:

“Travel restrictions imposed due to the pandemic have made it very difficult to receive funding from abroad and resulted in projects being postponed.”

Rami,[2] another representative from Damascus, spoke about the challenges faced by Syrian civil society, stemming from the lack of protection, security risks, negative stereotypes and access to opportunities, the attempts to politically polarize Syrian civil society, and the international focus on relief and development projects. The scarcity of donors poses another challenge, whereas the changing attitudes of donors disrupt organizational goals, priorities and responses to real needs on the ground.

Moreover, financial difficulties faced by the Syrian organisations in government-held areas are related to banks and international policies for transfers within Syria, where some countries have played a negative role by closing some accounts for organizations in Turkey and Lebanon. In addition, in government-held areas, transfers through the black market pose a security risk while money exchange procedures are quite costly. They asserted that programs, such as youth and women empowerment programs, have been disrupted as a result.

Rami confirmed that while this situation is not new, the challenges are mounting with the increase of sanctions. He stated:

“We spend a lot of our time to solve the problems of conversion which impact the implementation and planning processes of projects, as well as the institutionalization and localization of the work. The situation civil society in Syria has reached is weak. Therefore, it is important that doors of cooperation with donors are opened in order to be able to reach solutions that suit all parties and where civil society is able to continue its work and is not obstructed”.

Joseph Daher, representing IMPACT and We Exist!, presented the findings of a newly published study entitled Invisible Sanctions: How over-compliance limits humanitarian work on Syria – Challenges of Fund Transfer for Non-Profit Organizations Working on Syria. The study examines the financial limitations and banking challenges faced by NGOs working on Syria resulting from sanctions, anti-terror financial and banking laws and restrictions, and host countries’ regulations. In addition to these challenges, Daher highlighted the structural roots of the socio-economic problems in Syria resulting from the destructive war and the Syrian government’s policies, which have negatively affected civil society. In addition, the direct and indirect consequences of sanctions and banks’ over-compliance have played a negative role affecting many Syrians.

According to Daher: “Getting the money within Syria is the worst part and that is where the blocking increases”. Therefore, Syrian organisations resort to alternative methods to transfer the money inside Syria, including the Hawala system (local informal exchange offices). Sanctions increase the financial problems faced by NGOs and INGOs in Syria due in part to the lack of clarity in regards to the meaning of these sanctions in different countries and contexts, the de-risking policies of banks, and a decreased willingness to process any Syria-related matters.

As part of the various recommendations in the study, Daher emphasized the importance of continuous discussions with all actors involved, including humanitarian agencies, states, banking actors and civil society. He proposed the development of an independent non-profit institution to manage financial transactions for Syria and other situations of conflict as a sustainable solution to the structural problems faced by Syrian organisations.

Salma Kahale, Executive Director of Dawlaty, spoke on the impact of donor policies on civic space inside Syria and provided recommendations to donors and policy-makers on how to solve some of these structural problems. Kahale started out by emphasizing that:

“Any efforts to create pressure for democratic change and support human rights in Syria needs to be holistic. One tool such as sanctions and outside pressure must be part of a broader strategy so that it does not have an adverse effect on those trying to create the change from within, such as activists and organisations on the ground across Syria.”

As such, donor policies have sidelined small Syrian CSOs and CBOs, which carry out the daily work of challenging authoritarianism and extremism and providing services to marginalized groups and victims of violations. Fear of funding terrorism has resulted in funding withdrawals. Moreover, increasing funding to Syria has sometimes led donors to move away from funding Syrian CBOs and CSOs for “not wanting to deal with the hassle of trying to understand the Syrian CSOs better and engage with them, and instead allocate it to the UN and larger INGOs creating over-reliance” as Kahale explained.

Finally, Kahale proposed an additional recommendation for donors to carry out discussions with Syrian civil society and banks to rethink the channels through which aid and funding is being delivered, and attempt to find alternative mechanisms to enhance the ability of Syrian CSOs to access funding.