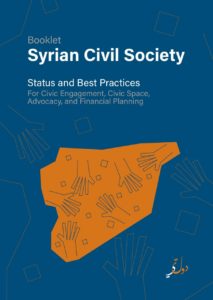 The ever-changing environment that the Syrian crises have brought along; at both political; military and economic levels has exposed the weak levels of performance and effectiveness of civil society organizations and their position with the Syrian borders. Consequently, the actual nature of the Syrian civil society organizations’ work has varied throughout the crisis, and it has varied between one geographical area to another. Therefore,  in order to formulate relevant responses, the Syrian civil organizations have since 2011 had to take on the role of interpreting societal needs; and identifying best practices and challenges that are faced by civil actors in Syria, throughout their work.

Hence, the complex reality plays a decisive factor, in terms of influencing the dynamics of the civil society organizations; including: ‘on which level they are allowed to operate’; ‘what form their activities may take’, and ‘what can be defined as safe spaces for civic participation’. The Syrian reality also plays a role in narrowing the framework of the civil society’s ability to formulate its financial planning and sustainability, in addition to restricting the ability of the civil society to do work that entails community mobilization and advocacy.

Dawlaty was devoted to monitoring these issues through a set of observation processes seeking to collect sufficient data to conduct an in-depth study hereof. Dawlaty conducted several focus group discussions with a number of representatives of Syrian civil organizations active on the ground, in addition to conduction of qualitative questionnaires and in-depth interviews with different segments of civil society representing diverse ideologies (including researchers, experts and practitioners engaged with civic work), in order to study and analyze these issues qualitatively. After finalizing both the focus group discussions, the desk review and observation processes, the study suggested that there are four main axes that play primary roles in setting the framework of the Syrian civil society organizations’ work. According to the study, these axes directly affect the course of Syrian civil action, and they are as follows; civic participation; mobilization and advocacy; funding and financial planning; workspace.

On November 29, 2021, Dawlaty launched the “Syrian Civil Society Handbook: Reality and Best Practices” on a dedicated webinar, during which representatives of Syrian civil society organizations, working in Syria as well as in the diaspora. During the webinar the representatives exchanged experiences and made context-specific recommendations, based on lessons learned and best practices from their experiences in dealing with the challenges they had faced, from the perspective of the four suggested axes framing the challenges of Syrian civil activities.